It can seem like the most pedestrian of places are devoid of character or compelling gravitas. Transportation hubs in particular especially tend to lack in the picturesque department. It’s a natural and understandable assumption; after all, bus traffic, taxi lines, train tracks and airport runways tend to repel the noteworthy, beautiful, hip and vibrant.

But time and again, beyond the soot, exhaust, clanging and chaos, there are jaw dropping places to explore. Sometimes it just takes a little more effort. My company’s app, Sidewalk, is designed to help people both discover and share these places and the stories behind them. Sidewalk delivers free guided walk experiences created by anyone with stories to tell about places they know and love.

In chatting with the Loculars team about Penn Station in New York City (a major commuting hub for many people going on Loculars experiences) and the neighborhood around it, we scratched our heads to recall fascinating or unusual nearby sites worth seeing. The area surrounding Penn Station largely features chain stores and fast food eateries. The actual train station is acknowledged to be a hallmark eyesore of Midtown West; its 1964 modernization is the reason why New York protects historic buildings today.

What is there to do near Penn Station and is there any chance it could surprise, excite or delight someone with time to kill before their commute? The Sidewalk team accepted the challenge. It turns out, there are some fantastic off-the-radar treasures. So many in fact, that we put together a “Block Walk” of a few of these places.

If you find yourself with a little time to spare in the Penn Station area, these are the quirky, fun and delicious places to explore nearby, and the stories behind them.

What it is: Block Walk: Roof Tops, Dumplings & Secret Hotspots of Koreatown on 32nd St – Midtown West guides you on a quick tour of four must-see places that you will love, whether you are a bibimbap novice or expert.

My Recommendation: You’ll love what’s in store for Koreatown: a dumpling shop where you can watch the chefs at work, an Instagram-worthy dessert bistro, a Korean emporium and a secret rooftop bar with up-close views of the Empire State Building.

What it is: Riding the trend of upscale food courts in New York (Chelsea Market, Union Fare, Urban Space Vanderbilt), Penn Station has created its own take on vogue gastro-emporiums. And it couldn’t be more convenient: the Pennsy is literally situated above Penn Station, on street level, and offers indoor and outdoor seating.

My Recommendation: There are six eateries to check out plus a legit bar, but make sure you pick up some donuts from The Cinnamon Snail. They make delicious artisanal flavors (think: Creme Brulee, chocolate peanut butter, raspberry apple cider, Thai basil coconut) and the big shocker: they are vegan! And vegan donuts are magically healthier, right? Right?

What it is: A visually-spirited oyster bar brought to you by April Bloomfield, the chef from West Village institution, The Spotted Pig. Aim to go for happy hour (weekdays: 5-7pm, weekends: 12-7pm). Skip the lobster roll and order raw oysters, mussels and parker house rolls.

My Recommendation: Sit at the bar, whether at the marble counters or the copper-top tables to situate yourself with the best view of the two sphere-shaped fish tanks. One holds fish from the Atlantic Ocean, the other features fish from the Pacific.

What it is: A rustic beer hall with 66 beers on draft, 82 in bottles, 19 in cans and 2 in wooden casks. The folks behind the counter love their job and are happy to talk shop with beer connoisseurs and novices alike. Plus the soft pretzels are delicious.

My Recommendation: The Ginger Man offers flights of any four beers on draft, so go wild and experiment your way into different regions, hops and breweries.

What it is: Recycled Railways, Frank Gehry & the Atomic Bomb: The High Line Park leads you on a tour of New York’s most design-focused park, created on 1.6 miles of retired elevated train tracks. At 30-feet above street level commotion, you have unencumbered views of cutting edge architecture, the Hudson River, and fun contemporary art.

My Recommendation: Be sure to walk through the distressed-urban-chic stylings at Chelsea Market and while you are there, pick up a “Red Witch” chocolate brownie with dried cherries from Fat Witch.

What other places near Penn Station would you add to this list? There are plenty more places to be discovered. This is our mission at Sidewalk. If that sounds intriguing to you, check out the Sidewalk app for iOS and Android. [hr]

Loculars thanks Jason Donahue for authoring this post. Jason is the co-founder and CEO of Sidewalk, an app that delivers self-guided walks created by anyone with stories to tell about places they know and love. You can download the Sidewalk app and explore the ever-growing collection of free walking guides, or publish your own walks and share the stories of your favorite places with others.

Check out some of our NYC photo experiences below!

New York from its iconic bridges

The vibrant nightlife of the Latino LGBT community

Experience and photograph the vibrant nightlife of the Latino LGBT community in Queens with a documentary photographer.

Street photography in Queens in arguably one of the best Chinatowns

Expand your horizons in one of the most diverse neighborhoods with the founder of a leading street photography collective.

Click here to view all of our New York Photo Experiences! 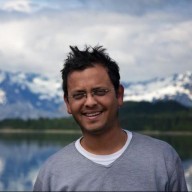